In the second of a series of Saturday workshop I demonstrated "Mingo Flats Road". First, the students were asked to study the reference photo and see how I manipulated the image to create a better composition.
Here's the reference photo, the sketch and the final pastel created for the step by step demo.
I chose to move the large trees and the house back into the middle ground closer to the background to give room to the mountain and create a sense of the largeness of the mountain.
However, I strayed from the value study of the sketch by making both trees the same value. If I stayed true to the value sketch the tree on the left side of the road would have appeared even further back into the picture plane. And in the value sketch the further back mountain looks as if a storm has darken it with the foreground still in sunlight.
I may have to try this again and I do like the telephone poles - also eliminated from the final piece. 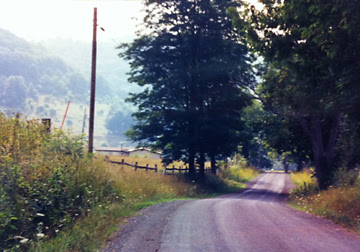 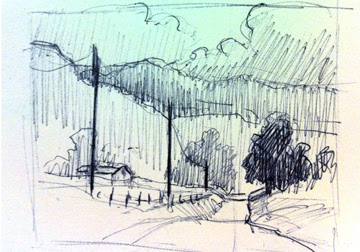 Posted by Marianna McDonald at 6:54 PM No comments:

Welcome to my Blog

Many of my pastels are created on location/en plein air and in the blog content I like to tell you why I'm interested in recording this moment in time. But in the winter, I'm pushed back to my studio which presents a fresh set of possibilities.
Also, I teach pastel workshops in the winter when I'm not involved with the art fair circuit. As part of that teaching mode I like to give information about color, composition and content as well as supplies.
You can find other work on my website at mcdonaldfineart.com
Thanks for visiting my blog.

Marianna McDonald
Lexington, Kentucky, United States
In 2001 I left my management job at the local newspaper to become what I always dreamed of - a full-time artist. I work mostly in pastel but sometimes in oil. I participate in 12 art fairs a year.